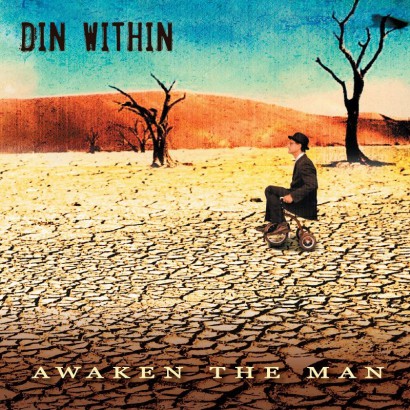 Awaken the Man – Din Within

Released late in 2007, Awaken the Man is the 63-minute debut CD by an American symphonic prog band that will no doubt elicit comparisons to Spock’s Beard, mainly because that’s the easy reference these days when a variety of British progressive rock influences are run through an American filter. It’s not a bad reference though, as Din Within have that same huge symphonic rock sound, technical skills and crisp production married with catchy melodies. Kansas is also a good reference, Rocket Scientists to some extent, and the one reviewers below a certain age will miss, Todd Rundgren’s Utopia (more so vocally and in the ballads). In addition to the Yes and ELP influences, Din Within have more of a Genesis influence than Spock’s Beard, while one song is quite Floydian. There are loads of instrumental passages. Din Within’s singer is not on a par with a Neal Morse when the lead vocals go it alone, but when backing vocals have been added, it produces the Utopia effect of average singers combining to create powerful ensemble vocals. Maybe the best reason to compare Din Within to Spock’s Beard is that one gets the same feeling listening to Awaken the Man that one got when listening to the first Spock’s Beard CD, that it will be difficult to keep this band a secret much longer.

Progressive music, in particular American prog, is like the hydra with its multiple heads – if one head dies, another emerges elsewhere, to our delight. Din Within is a newly formed band that spouts out of the geyser that is New Jersey. In fact, it is actually a duet of the guitarist Josh Sager – who is student of Scott McGill as well as a self-taught student primarily of jazz – and the singer/bass player Mark Gollihur, whose mother (recently passed) was a music and musical theater teacher and who passed on her genes and musical knowledge. Both players, nevertheless, share a passion for progressive rock, particularly for artists such as Kevin Gilbert, Neal Morse and Spock’s Beard, and Rush, while also being avid listeners of music such as the Beatles, Jazz and Classical music.

Although the duet cannot lay claim to a music revolution, they clearly have the ambition to provide pleasure with a musical style that does justice to their influences and inspirations. It is undoubtedly the key to their success on this album. One could fear that a “studio project” consisting of a duo would lead to a sound that would be artificial and non-cohesive. Yet, it is the opposite. With assistance by Josh’s guitar teacher Scott McGill, and the drumming contributions of Mike Ian, the group creates a debut of excellent quality, with music that is perfectly written and played, carefully composed melodies, vocal harmonies that are a work of gold, and varied textures throughout the album.

It is enjoyable for the listener to try to identify the influences of the group; a guitar solo from Boston here, a jazzy digression there, pop music elements elsewhere, a big nod to Genesis in “Awaken the Man”; but to my ear, much of the music bears some resemblance to Spock’s Beard, and even the tone of the voice sounds a bit like Nick D’Virgilio. Though Din Within do embark often on long-format epic songs, their sound also includes shorter songs; the album is a complete work. It is a small jewel that one will want to listen to over and over again. It is fresh, carefree, and will lift one’s spirits such as a musical antidepressant.