You’ve found the modern, sophisticated style of Second Story. The band’s music is often called “Neo-Prog” or “Sympho” – their unique brand of pop/rock blurs the line between commercial, “radio-ready” rock and a more progressive, conceptual sound. It’s progressive music for people who don’t think they like progressive music.

Second Story is not an active project; the band ceased performing and recording together in 2004. However, in March 2020, we were proud to finally release “Thin Twisting Line” as a newly mixed and mastered 2-CD set (which included a re-mastered version of the self-titled album as a bonus disc.) You can purchase it here or at the new Second Story website.

Feel free to check out the band’s original, archived website at http://secondstory.digitaldin.com 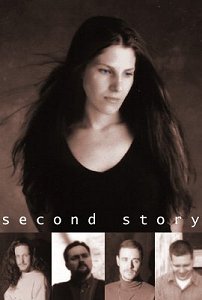 “What kind of music is it? Who do you sound like?”

These are the two most often asked questions of any original band. For many years, we’ve been trying to find some suitable answers to these questions, and yet still they elude us. As originally envisioned by the band’s founders, Scott and Mark, the sound of Second Story would be primed for the Lilith Fair: warm female vocals, moving lyrics, and lush musical arrangements. Yet as the band developed – and the lineup evolved – that intended musical focus blurred.

Reaching more and more deeply into our many influences, we eventually wound up with a swirling blend of pop, rock, progressive, AAA and electronic styles; a unique “musical soufflé” which generally defies comparison to other established musical groups. With a total of four former (and current) lead singers in the band, we feel that our finely honed vocal blend is our most recognizable asset. But, we’re also known for our finely orchestrated arrangements, which often feature unusual playing styles and instruments. All of that aside, it is clear from the first listen to our independently produced CD that songwriting came first for Second Story.

The group’s members come from a long and varied history in making music. Among the band members’ past projects are the highly popular “shock rock” group Inspector 12, progressive metal power trio Ransomed Soul, modern rock group Marcella’s Dream (aka Under the Willow) and many more. Members of Second Story have also been involved in various audition-only ensembles, as well as done a number of freelance live and studio sessions.

Over the last five years, our unique ‘sound’ has been found equally appealing by audiences at in-store appearances, outdoor festivals and rock clubs alike; we’ve performed for appreciative audiences at popular venues all over the Delaware Valley. In addition, the band has been a featured artist at many special events and concerts, including the Philadelphia AIDS walk, Medford Arts and Music Festival, and many other charity benefits and music festivals.

Ultimately, we simply write music that satisfies us creatively. We infuse our songs with elements from progressive rock, pop, metal, jazz, trance… and the list goes on. Our sound may not be the “least common denominator” on commercial radio, but for the many people who “get” it, it’s a refreshing break from the norm. And our loyal fans thank us for it.