My Telecaster – Modded to the Extreme! 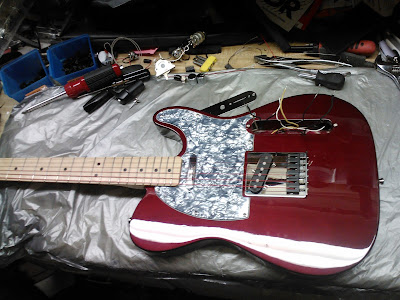 So yeah, I have this habit of modifying pretty much every guitar or bass I own. I think that the only guitar I haven’t tricked out might be my Robot Guitar, and that’s simply because it has some complex electronics that I don’t want to mess up.

So anyway, my MIM (Made In Mexico) Standard Tele, which I earned with Fender sales back when I worked for a major music store in 2002 or so, has been getting the Frankenstein treatment almost since the day I received it. I started by swapping out the plain white pickguard for the cool pearloid black one you see in the photo – and I didn’t stop there.

I think now that the only parts left on the guitar that are original are:

Everything else has been upgraded.

The pickups and electronics are one of the latest upgrades; I kept the original MIM pickups for a long time, and I had previously put in a 4-way switch. This allowed for standard Neck/Neck+Bridge/Bridge switching PLUS a 4th position for Neck+Bridge with Series (rather than Parallel) wiring. From Rothstein Guitars, I provide you with a well-worded understanding of the upgrade:

Adding a 4-way switch to a Tele is one of my absolute favorite mods. Without any visual differences to the instrument you get a totally different and really really useful 4th sound, namely bridge and neck pickups in series. Normally, when 2 pickup are combined in position 2 of a Telecaster, they are wired in parallel. This is a fine and very classic Fender sound. The nice thing about the 4-way mod is that you don’t lose this sound, as the classic parallel sound still remains in position 2. However, you gain this really beefy tone with the added series connection in position 4. It provides a noticeably thicker and louder sound that is a bit darker as well. In esssence, you’ve taken the 2 single coil pickups and combined them to become a humbucker in this position. I like to kick this position in for solos.

Visit that page for wiring diagrams and further information.

So, the pickups always sounded good, but my GAS (Gear Acquisition Syndrome) kicked in, and I got a set of No-Caster Tele pickups. (The No-Caster was an early 50’s model of the Tele, so-called because Leo Fender had to remove the original name, “Broadcaster,” from the labels due to a trademark lawsuit over the name. Hence, the guitar had no “name” on it other than Fender, and became known as the No-Caster.) My new pickups are faithful recreations of the pickups in that guitar, down to the winding, wire style and gauge, and cloth covered wiring. And they sound fabulous.

When I was upgrading my Tele Bass (for another post) I came across a company called “ToneShaper.” They create pre-wired, modular systems for replacing controls on popular guitars. Wanting to upgrade to better quality electronics, I figured I’d take the leap; they even had a setup that allowed for the 4-way switching – AND the reversed electronics I favor (putting the switch for the pickups at the bridge end of the control plate, more like a Strat, and the volume knob at the neck side of the plate.) And the guitar sounds STELLAR – between the clean, improved wiring, and the excellent pickups, it sounds like a million bucks.

So what else have I changed out? Well, the tuning machines were average, and I HATE poking my fingers with the E-string when stringing, so I got a set of Fender locking tuners. SO much easier to re-string. Also, they stay in tune better, and have better tuning action. And they dropped right in, with no modification, and you can barely see a difference. Very “OEM” upgrade.

I also put a set of Graphtech saddles on the bridge, and put a custom neck plate (with classic 80’s Fender artwork) on the guitar. I also got a pair of knobs to replace the original flat-tops – they feature a glass jeweled top in almost exactly the same color as the guitar; normally I don’t like flashy knobs, but they look totally money. Finally, a set of straplocks to keep the thing from falling to the floor…

All in all, this guitar is finished. Plays well, sounds amazing, and has custom features and plenty vibe to spare.

Digital Din About to Come Back Online ›