It’s been a long time since I bought a new bass amp; I’ve purchased a few smaller things (like a Bass Pod Live) but no actual amps. I’ve long enjoyed the massive tone options of my insane bass rig (the subject of a future post) – but it’s getting to the point where I want to do “pickup gigs” and other jams that don’t require the sonic flexibility of that rig. And since that flexibility comes at the cost of size and weight (a six-space rack and a two-space power amp, plus cabinets), it was unwieldy to say the least.

I’d considered some upgrade options; I tried a Euphonic Audio iAmp500 with my 2×10 SWR cabinet, but they didn’t really suit each other that well. I considered a micro-sized rig, like an Acoustic Image Focus with an EA Wizzy cabinet, but the price started spiraling out of control – and since I’m not actively gigging, I couldn’t justify the cost.

Enter Markbass. I’ve seen their stuff around, and lots of folks on the boards have been talking about how nice their gear is for a while, but I never had the opportunity to try out their amps or speakers. They just started carrying Markbass at Guitar Center though, so one day when Josh and I were there just window shopping, I decided to take a closer look at what they had. Here’s what I found: 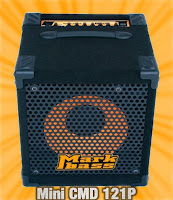 This beauty is the Mini CMD 121P; it’s a small-format combo amp that has the “Little Mark II” power amp mounted in a 1×12 cabinet with tweeter.

And I proclaim it the “VOICE OF GOD” in a package that weighs under 30 pounds.

As it sits, it has 300w – add a second 8ohm cabinet and it jumps to 500w. Punchy, loud, and accurate (that’s important to me) it just sounds great without having to fiddle with the knobs. Most of the time, I run it totally flat, it just sounds like me. (As I’ve always said: 70% of tone is in your fingers; the other 30% is in your other fingers).

Along with the very usable and musical EQ, it has a “vintage voicer” which offers a sort of darker, old-skool vibe, and a “slap voicing” which – predictably – gives that scooped mid sound that slappers love. Both are on rotary controls, which allow you to bring in as much (or as little) of those tones as you like. Add a Tuner out, direct out, effects loop, XLR input – there are just too many cool features to list. And even though the strictly enforced pricing policy has it price-locked at $899, I figured out an end-around that got it into my hands for a good bit cheaper (big surprise).

I’m totally digging the sound, and it would have even been worth the 9 bills if I’d paid full price. I’m definitely looking forward to using it often.

Consider this my unpaid endorsement – if you haven’t checked out Markbass amps, please do! 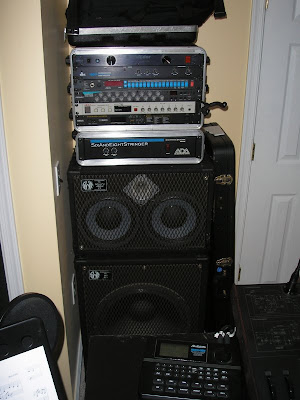 I recently picked one of these little guys on eBay, and I’m really enjoying it – it should make for a really good studio amp. It reacts nicely to pedals in front of it, has a nice and simple tube tone. I’ve had fun running the Tele and the Strat through it.

Of course, I’m a big fan of modding, so I started looking for replacement tubes and speakers – and I found a full mod instruction/kit to really amp this thing up. So I think I’m going to go for it. Here’s the walkthrough – check it out!