Blast from the Past – 20th Anniversary Concert Event

From 1990 to 1994, two of my best friends and I performed in an all-original, progressive hard rock/metal power trio called Ransomed Soul. Those were some of the most fun musical years of my life; I was in college, in my early 20’s, in much better shape, and fully enjoying the moment. We had the common pipe dreams of “getting signed,” and spent every waking moment doing things for the band. In fact, my college achievement (and subsequent job prospects once I graduated) probably suffered a good bit thanks to Ransomed Soul. But I don’t regret it. Over the years, we composed at least 20 songs together, and played loads of clubs all over South Jersey and Philadelphia.

It was incredibly frustrating at times; we were playing a fairly complex, “thinking-person’s” brand of hard rock, which didn’t exactly find a very strong foothold in an market where teased hair, spandex, and simplistic rock anthems were the norm; plus, towards the end, the new “Seattle Sound” was starting to take hold and was effectively pushing us out. It wasn’t at all uncommon for us to play unsatisfying, unpaid gigs to seedy rooms of 4 people — 3 of which came in the van with us (and the other one was drunk and heckling us).

But that is the original music scene for most of us, so I’m not complaining (much).

Yes, we took ourselves awfully seriously – we wanted desperately to create music with a message that meant something, and wanted the music to be intellectually interesting, yet catchy. And of course, we wanted to impress everyone with our stellar chops (which, in retrospect, were only moderately stellar.) Certainly, if we had it to do over again, we’d probably scale back the pretentiousness a bit – but your early 20’s are a time when you’re sure that you know everything; I just like to think that we dove in headfirst, taking full advantage of our own naiveté.

Why the name? I’m not 100% sure, we just sort of liked it. Scott actually wrote a song called “Ransomed Soul,” and we decided that it made for a cool band name, too. We’d previously flirted with names like “Valkyrie” and “Solitaire” but figured they were too common to not be taken. Ransomed Soul was never a religious band, but people often confused us for one; the concept of a “ransomed soul” or “soul held for ransom” is often found in religious songs and writings. Unfortunately for us, the name — while original — also was very rarely spelled correctly on marquees or club posters. Some of the unintentional misspellings were laughable (but most were just annoying.)

We played our first real “gig” at the venerable (ahem) Bonnie’s Roxx in Atco NJ; a rock/metal club with the infamous “party cage.” Wait, what? Explanation: The club was “all ages,” so younger patrons could pay the cover and see some live music – but Bonnie’s also had an area of the club which had a floor-to-ceiling chain-link fence “cage” with a single entrance, manned by its own dedicated bouncer. Those who were of legal drinking age (or who had a very good fake ID) could get into this separate area, where they could both see the bands AND consume a selection of adult beverages. It was also common for the frontman of particularly frizzy-haired bands to climb the fence as part of their posturing. That, and swing around the support pole that sat just off dead-center in the middle of the stage.

We played at Bonnies on at least a dozen other occasions; other venues included the Fastlane in Asbury Park NJ (no, we didn’t run into Bon Jovi or Springsteen), Reds in Margate, the 23 East Cabaret in Philly, and a bunch of other bars and clubs, mostly seedy. A particular favorite was Miller’s Inn in Tuckerton NJ – we’d get there with our gear, and while we were loading in and setting up, the pole dancer at the bar would be collecting dollar bills and occasionally slipping a “peek-a-boob” for particularly generous patrons. Then the 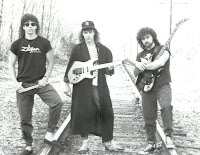 lights would go out, the dancer would get dressed and leave, and the rock show would begin. Truly an experience.

We also played lots of shows on campus at Glassboro State College (now Rowan University), including winning a “battle of the bands” and performing several Earth Day concerts and other benefits. We had interviews on the air on the college station, too. It was altogether a really fun time, and we were so rock and roll!

Our last gig was at a short-lived rock club called “Six Shooters” in Atlantic City. Despite my having just purchased a brand new bass rig, the turnout was so small and response so lukewarm that we just decided, while we were packing up, to pack it in for good. It was a good run, but the time had come to move on to other projects – we were just tired of beating the pavement and only ending up with bloody knuckles.

Mike (Drummer), Scott (Guitarist) and I continued to remain the best of friends, and we even occasionally got together over the ensuing 16 years to jam, hang out, and reminisce. We even had a jam session at the surprise 40th birthday party our wives planned for Scott and myself. That jam was so much fun, we decided to celebrate our band’s 20th anniversary with a “real” full-scale reunion concert.

So… we’ve scheduled it, and we are looking forward to a fun night with old friends, and hopefully some longtime fans hungry for a fresh dose of live “RS” music. Details are below, and you can also visit our Facebook Event page for the Reunion Show. Some photos and other info about Ransomed Soul can be found at our Facebook Ransomed Soul Band Page.

If you’re in the region and want to enjoy a fun, old-school, slightly tongue-in-cheek performance of earnest, progressive-tinged hard rock, performed by a couple of 40-somethings with nothing to prove anymore, why not come on out? It promises to be a really good time.