Digital Din About to Come Back Online

Digital Din Studio is finally almost completely moved into its new location; I’ve been working hard to get things set up and operational so I can get back to work (but it unfortunately has to take the backseat to prepping the old home for sale and caring for my 2-year old.)

In any case, here’s some photos of the progress! 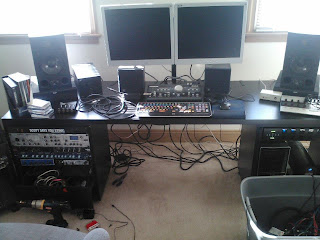 Here’s the new desk setup. A nice thick tabletop from Ikea, mated to a pair of 12-space racks on casters, makes for a much wider, more accommodating desk than I previously had. It also puts the vocal channel strips (Focusrite, dbx, Alto) and other mic processing a lot closer and more easily accessible. In the right rack case, I have my computer and the battery backup power supply for it, as well as the central power station, which houses a surge protector and separate outlets for all of the sub-racks. This allows me to power up without doing the “power switch dance” from rack to rack.

Also note my relatively new Adam monitors (they ROCK) and my homemade “grok box” cube monitors (based loosely on the Avantone MixCube monitors). All controlled by the Mackie Big Knob, right under the dual 19’s. And my computer keyboard wears the cool shortcut key stickers for SONAR that I recently got. 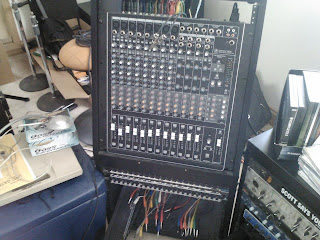 Just to the left of the desk is my main mixing board, the Mackie Onyx. It also acts as my interface, using Firewire to send the audio to my computer. 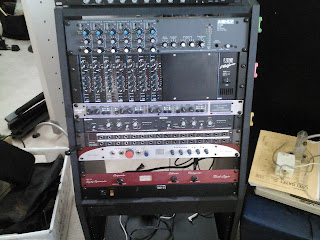 This is my newly reconfigured “Drums submix” rack. My Ashly stereo mic mixer is at the top, for submixing the tom drums into a stereo mix; underneath is a set of Urei gates, and compressors from Symetrix, Aphex and RNC. 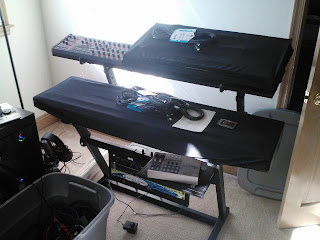 To the right of the mixing desk is my keyboard/MIDI setup; they have covers on them in the photo, but underneath is the Alesis QS8.2 (88 keys, weighted hammer action) and Korg MS2000 (Analog Modeling Synth). On the left is an Access Virus (on loan from Din Within co-conspirator Josh). There’s a line mixer underneath so I can send everything to the main mixer on a single pair of stereo cables for convenience. 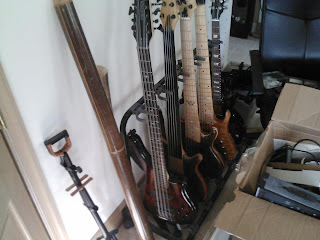 That’s a lot of strings. 4 basses, 1 guitar – 36 strings. The one in the front is my modified Galveston 12-string bass. Then comes my custom 6-string fretless by bass-builder (and friend) Karl Hoyt, and its younger fretted sister (which I affectionately call the “Monkey Bass” due to its inlay at the 12th fret). Then, the old workhorse – the 6-string PBC 356GTB bass which did all the heavy lifting during the Second Story gigging years. Finally, my nifty Gibson Les Paul Robot Guitar, which sounds great and saves me a lot of time by tuning itself. 🙂 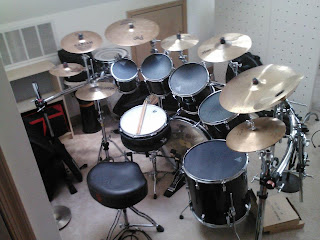 And the drum set is totally set up; it’s an old (80’s vintage) Pearl Export Kit which I acquired from a longtime friend. I added the 8″ and 10″ rack toms (it was originally a 5-piece) and put new top and bottom heads on the entire kit. The stock snare is off to the side, the current fave is the Peavey Radial Pro. Most of the cymbals are Sabian, and the whole kit is racked up on a Gibraltar 3-sided rack (two curved bars, one straight one across the front.) A set of DW Double Bass Drum Pedals provides the kick. This is not a “high dollar” kit, but it sounds like a million bucks – the time I spent carefully cleaning, seating heads, and tuning the drums to their “home pitches” was absolutely worth the effort. 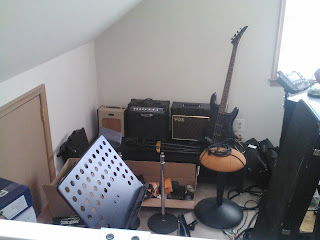 Finally – here’s the guitar/amp corner; the door to the left opens to a small storage area that I plan to treat with foam and use as an “iso-box” for guitar amp recording. My modified Fender tube amp, Line6 mini Franken-combo, and Vox mini combo are all ready to mic up, and out of frame is my Ampeg VH140C combo and Josh’s Line6 2×12. I also have a Line6 Pod 2.0 and M-Audio Black Box with foot pedal, which are both easily accessible from behind the main desk.

More to come as I make progress cleaning the place up!

‹ My Telecaster – Modded to the Extreme!