On Selling Your Stuff (aka regrets)

When I was 16 years old, my parents got together and purchased an electric bass for me as my combined Christmas/Birthday present (my birthday is two weeks before Christmas). It was a big deal; we weren’t “made of

money” by any stretch, so it meant a lot to me – and changed my life, musically. My dad is also a bassist, so he was able to “vet” the purchase with knowledge of getting a “good” bass for the money. It was an Epiphone (by Gibson) Rock Bass, a four-banger with J-bass pickups and a slim neck. While a relatively humble instrument, Dad picked out a really good one with excellent resonance, clean electronics, and he set it up to play well. I played that bass for many years, onstage and in rehearsal, with several different bands. Some songs I wrote during the period only felt “right” on that bass. I later upgraded it with a set of EMG pickups and it sounded amazing. 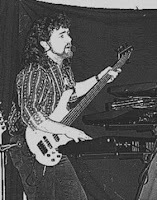 When I felt like making the jump to a five string, I found a fiver made by an (at the time) unknown brand called “Samick” at a local music store for $350. It was nifty, with a modern body style, J/P config active pickups, a pearlescent white paint job, and cool Saturn inlays on the fretboard. Again, played the hell out of that bass, and also upgraded to EMGs, this time with 18v electronics and their BTC circuit. Sounded, played killer.

In times of low income, or desire for new gear, regretfully I sold these “firsties” to other folks. They both went to good homes – the four-string went to a co-worker who wanted to learn to play bass, and the five-string to an online bass forum friend, who bought it as a backup bass (but later admitted that it took first-call duties over his formerly “main” axe because it played and sounded so good.)

Now that I’m older and have a bit more spendable cash, I really wish I had both of those basses back. I almost have contact with the old co-worker (I’m friends with his friend and have emailed his spouse on Facebook, but not gotten directly in touch with him) and I’ve tried to locate the email address of the guy who bought the Samick (but lost the original email trail in a computer crash several years ago).

Recently, the band where both basses got lots of play re-formed for an anniversary concert (see my last blog entry for details). The show was a great time for both us and the audience; I’ll post links to the YouTube clips soon. I really would have loved to have both of those basses for the show, but I had neither. So I recreated them; I got a black Epiphone just like my old one (but not quite as good) and found a Samick that was pretty close; I played the Samick for the show. It had the feel and sound of the old white one, but I still wish I had the old one back.

I went through all that to say this: gear has to be sold to make way for new gear. But if at all possible, try to hang on to your substantial “firsts,” even if they’re cheap Epiphones, Samicks, or otherwise inexpensively obtained instruments. I can say from experience that you’ll probably regret it. 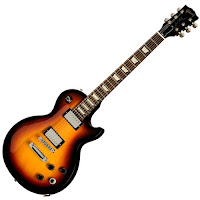 One of my acquisitions during my downtime was one of the Les Paul Studio “Robot” Guitars. People’s opinions of this guitar’s usefulness vary pretty widely around the net, but I quite like it, especially in the studio. And since they were essentially on clearance, I got a USA-made Les Paul for under a grand, with all the rights and priveleges pertaining thereto… AND got a guitar that can fricking TUNE ITSELF.
“Big deal,” you probably say. “I can tune my guitar just fine.” Well, sure! But it’s pretty handy, I gotta say. Especially if you’re constantly retuning to different tunings for different songs – for instance, this thing would be awesome if I was a guitarist in a cover band. To silently, quickly retune to drop-D while the singer was addressing the crowd would be useful, no? No waiting for the guitarist to stomp on a pedal tuner, and trying to fine-tune with all sorts of stuff going on? And it does all six strings at once, which I know you can’t do. So it’s efficient and cool. And I gotta admit, it’s hard not to grin while watching the tuners spin whilst doing their thing.
Another aspect that gets overlooked: re-stringing. It has locking tuners, and a mode where you simply get the string on the post, hold it in place, and the guitar automatically winds the string up to pitch! No more bleeding fingertips from the damned high E string, no more of the string slipping off the post.
Finally, the guitar has a built-in intonation mode. You play the note at the 12th fret, then play the 12th fret harmonic – the guitar then tells you how many turns on the intonation screw to make to get the string properly intonated. C’mon now, that is cool.
Now, would I have spent the original $3000+ price for this guitar when it first came out? Hell, no. But for the very slight upcharge from a standard Les Paul Studio, it was a no-brainer. I did sell my heavily modded Fender Toronado to fund the purchase, which was bittersweet, but since I’m not a guitarist, I couldn’t really justify having both (since I still have several other guitars as well). But I’ve been very happy with the Les Paul – it’s a very resonant, great sounding guitar, plays really well and is lots of fun to play with.
Uncategorized
Share :

Update! It’s been a while…

Sorry – to anyone who bothers to read this blog – for the long, long delay in new postings. A lot has been going on in my musical life, and I should have some new things to post about.

Not music-related – but one other major thing; my wife and I are expecting our first child in a matter of weeks (if not days!) So… that’s had me pretty preoccupied.

So, hopefully, I’ll get back on the bandwagon and post some new stuff!

Drumagog has saved my project!

Some recording for a friend

I did some recording last Thursday with my friend Jeffrey Fields; he had a couple new songs he wanted to demo, and we got one tune done during the course of the evening. He plays a loose, casual folk or “Americana” style with acoustic guitar and vocals, occasional harmonica, etc.

The session went fairly well, even though I was pretty unorganized; we recorded his vocals and guitar together to get an intimate, live feel – though that made it pretty tough to do any “punches” or re-tracks if we needed to. He nailed a great version after a couple takes, and it sounded quite good.

We then made a few small additions; a subtle tambourine and kick drum during the chorus, a small ride hit on the last chord – and he let me drop in a simple vocal harmony on the chorus as well.

When all was said and done, I think Jeffrey enjoyed the experience and liked the results. And I enjoyed working with someone new. I hope to get together with him again soon to track the other tune. This time around, we may try separate tracking, maybe even a metronome, just to leave options open. But ultimately, it’s his project, so we’ll do what he wants! 😉