Why do you guys sound so good? (When we sound so bad?)

This is an article I wrote for an online magazine back in 2001. When Second Story was gigging regularly, I used to get asked a lot, “How come you guys seem to get better mixes and sound from the soundman than we do?” Here’s at least some of the answers.

Getting Great Sound from a House Soundman

It always amazes me how many local artists tell me that they don’t play a certain club anymore because the “sound man is so bad there.” With rare exception, I tell them that whenever we play that same club, our front of house sound is just fine. Granted, there are clubs that have people behind the boards that shouldn’t touch the tone controls on their home stereo — much less a fader on a mixing board — but those clubs are so few and far between that it usually isn’t the issue.

Getting good sound in your local club can be a matter of following a few simple rules, most of which I’ve seen broken by most of the bands we’ve played with over the years. Whether it be ego or ignorance, not doing your part to get good sound is probably doing far more damage to your front-of-house mix than the soundman’s inability (or indifference.) Here are a few things that I’ve learned over the years; many of these were tips from soundmen, many just revelations and discoveries after lots and lots of gigs over the years.

Above all – BE NICE.
The soundman is just doing a job. To him, it’s often no different than your weekend gig behind the register at the corner drug store. It’s a paycheck. He obviously has to do a good enough job to keep the gig, but if you’re not pleasant and friendly, he’s not going to invest more than a minimum of effort to get you guys on stage. If he’s thinking, “these are cool guys,” he’s usually going to sit behind the board and bring the fader up when the guitar player starts his solo, instead of wandering off to get another beer.

As an addendum to the above, be considerate.
We’ve got an amazing amount of gear for our live show. Between MIDI and “regular” bass, two guitar preamps and midi guitar, keyboards, a sampler, drums, percussion… we could be a soundman’s nightmare. But we’ve carefully designed the way our equipment works so that it is simple for the engineer — one mic (on one speaker) covers all three guitar preamps, a high-quality DI (with a three-foot XLR extension cord that hangs off the side of the bass rig) covers all the bass, and the sampler runs through the keyboard player’s rig, which is also handled by a single DI. Voila! Even with all our complex gear, we’re as simple to mix as a standard 5-piece group. Also included in being considerate – get your gear onstage and set up quickly and efficiently, and when the show’s over, don’t waste time breaking down, especially if there’s another band after you.

Have decent gear.
This may sound like a no-brainer, but I’ve heard bands whining because they didn’t get a good sound out front; meanwhile, the guitarist is using a stomp-box through a Peavey Audition 20, the bassist has 40 year-old strings on his $110 bass, and the drummer hasn’t changed his heads (or tuned his drums) since he bought the kit for $200 in 5th grade. While not everyone can afford top-notch gear, you’ve got to have decent tools to build a good show. Even if you polish a turd – you’ve still got a turd.

Stage volume is key
So many times I’ve seen bands with a guitar player whose rig is so mind-bogglingly loud that the soundman actually turns off the mic in front of his cabinets; there’s so much volume coming from the stage that he can only try to even up the level of the other instruments to compensate. At this point, the soundman has lost control. If you have a bad mix now (and you most certainly will) it is your fault. Need that full-blown distortion sound? Get a Marshall Powerbrake or something. Though this seems like common sense, I see it all the time. Usually, for these bands, I leave the room – it makes my ears hurt.

Set up “Side-stage”
In clubs that amplify all the gear (drums, bass, guitar – not just vocals) your amps become redundant if they’re facing the audience. What’s the point of facing the amp at the crowd if all they hear is the mains? Turn that amp sideways to face the band – not only will it allow you (and your bandmates) to hear yourself better, but you can also turn it down a bit and get a little clarity on stage. Also recommended: tilt that baby up towards your head. If your amp is hitting your pantlegs, you won’t hear it as well as the poor bassist on the other side of the stage (and vice-versa) and you’ll both turn up, negating each other’s efforts.

Think ahead
Does your band have a sound that is unusual? Do you have specific mix requests? Don’t expect the soundman to know these things, you’ve got to tell him. Obviously, don’t overdo it (“in the second chorus of the third song, we NEED you to put a huge slapback delay on the background vocals”), but if you’re a keyboard heavy band playing in a guitar-rock dominated scene, you should let him know. And if you’re planning on whipping out a Sousaphone in the third number, he should probably know that as well. As an example, I often use heavily distorted bass sounds; I let the soundman know ahead of time so that he doesn’t think something’s wrong with the bass when it gets all “fuzzy.” I also use a subharmonic synthesizer module occasionally – I make sure I warn him about it so I don’t blow his subs. (Note: one soundman didn’t believe me and brushed me off – I actually DID blow two of his subs because he had them cranked. That was HIS fault.)

Finally: Be appreciative
When the show’s done, ALWAYS thank the soundman, even if you may not think it was his best effort. They like to hear that they did a good job just as much as you like to hear it from the audience. If he did an amazing job, it’s not unheard of to slip him a tip and/or buy him a beer. Even if just a thank you and a handshake, he’ll remember you next time you play there – and it will be a pleasant memory, not a “oh no, not these uncivilized rock star wannabes again.”

All in all, I’d say that the vast majority of sound problems can be solved with some effort, forethought, and common courtesy. Remember that your ultimate goal is to have great sound out front – a soundman can make a great band sound horrible if he wants to (or doesn’t care.) But all that even the best soundman can do for a under-prepared, ill-equipped band is to make them suck a lot louder. 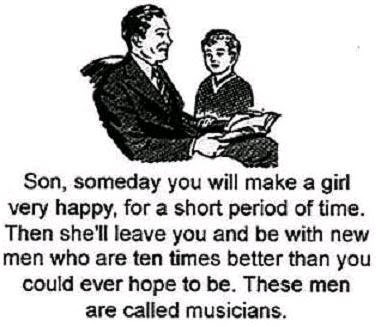 Re-living the past, bassically… 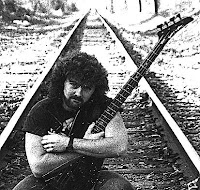 In 1987, for my birthday, my parents bought me my very first bass guitar. That instrument was a “Rock Bass” from Epiphone/Gibson, a basic, passive model with a J-J pickup configuration. It was a great “starter” bass for the time; made in Korea, back when there wasn’t anything worth owning coming out of China – it was solid, well-appointed, good-sounding and even kinda cool looking (pointy headstocks were all the rage in the late 80’s.)

That bass carried me through my early years as a player; it was my main b

ass for Outcry, my first “real” band that played “real” gigs (only two of them, but we rocked out both times!) When I co-formed Ransomed Soul with my friend Scott in 1990, that was the bass I was playing. It saw lots of action at lots of seedy bars (can I get a shout-out for Bonnie’s Roxx?) and sounded really good.

When I cobbled together the scratch, I upgraded the pickups to an EMG JJ set. When we recorded our debut album(s), I ran the bass right into the mixing console with no additional preamping or other toys – and the bass really sounds tight on those recordings. And it played really well.

As the years went on, 5-string basses became more popular, and I eventually found one that worked really well for me and started using that as my main bass, which relegated the Epi to backup duty. Once Ransomed Soul broke up, she mostly gathered dust. When (with Scott, again) I co-founded Second Story in 1996, it was playing my new SIX-string bass. Knowing that there was little to no chance that I’d be using the four string for any of the Second Story material, and needing the duckets for other musical gear (a future post will detail my INSANE Second Story rig), I sold “Heather” (yes, she had a name) to my co-worker and friend – and aspiring musician – Tom. A few months later, I was transferred to a new store, and I lost touch with Tom, the bass, and eventually, that job.

I’ve recently been feeling a bit nostalgic for old musical toys, and I don’t really have a way to get in touch with Tom – so, I’ve been trolling eBay for similar basses to the old girl – and a little over a week ago, I found one: Epiphone Rock Bass, late 80’s vintage, black hardware (rare) on black bass, rosewood fingerboard, JJ pickup setup… in good, played but not abused condition. The bass is virtually identical, and even came with the original case. So, I snagged it.

Because I’m a total freak, I also snagged a set of EMG old-model JJ pickups on eBay for cheap – used, but not abused. I figure that a little soldering will get me an almost exact duplicate of my original bass – all I need now is a set of black Dunlop Straploks and a purple strap…

So I’m really digging re-living the past – the bass will mostly live on the wall in my home studio, and maybe get pulled out for the occasional studio track. But it’s cool that I was able to find it.