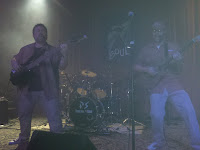 Our 20th Anniversary Concert, mentioned in an earlier blog post, went down on June 11 – 20 years, almost to the day (June 6) after our very first public performance as a band, at Bonnie’s Roxx in Atco NJ (long since closed down, razed to a parking lot, and remembered as a much better venue than it actually was.) The concert was held at the Auction House Arts and Music Center in Audubon, New Jersey – an excellent venue run by some very cool folks!

We played just about every song we ever wrote together, including a few that had only been played live one or two times, so they were “new” to even some of our most dedicated fans. Among the relatively unheard songs were Father and Buried in the Bottle. We also brought along a sampler, which allowed us to play old audio clips from the archives, including introductions from our friends Mark and Cheryl (lifted from when they played our song on their college radio station), and clips from call-ins to when we were on the radio at GSC (Rowan) – several people who were in the audience for the concert were surprised to hear their voice from almost 20 years ago!

We also used the sampler for our new intro clips for our song Liquid Faith, featuring some of the many insane statements of Glenn Beck (his lunacy replaced that of Robert Tilton, whom we had samples of back in 1993-94, carefully timed on an audio-cassette to sync up to our live performance). Finally, we had a couple random “Easter Eggs,” like the original “I did that on purpose!” ending for Break Down the Wall – a humorous outtake that appeared on our original 5-song “Seeds of Time” cassette — but was omitted on “Timeline.” 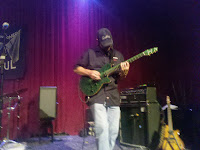 n moment – one of our last songs featured a surprise cameo by our friend Kevin, who performed the whispered “Goodbye” on the studio version of The Hunt – we got him to reprise if for the concert (though he didn’t know it was coming.)

A playlist of our entire 2 hour concert is posted at YouTube across several separate videos, linked together for ease of watching uninterrupted. Enjoy!

On Selling Your Stuff (aka regrets) ›