One of the issues that I’ve always dealt with is getting a good, consistent mic signal from a guitar or other stringed instrument, especially in the studio. Once you get the distance, angle, and orientation set, the player starts playing and moves around – and the whole thing gets out of whack. Plus, who wants to sit stock-still while trying to record a guitar part? You just end up with a stiffly-played, unevenly recorded part.

That’s where the H-Clamp comes in; it’s a very simple – but super-logical – answer for the need for a stable mic holder for guitar, upright bass, and a host of other acoustic instruments. Made by a UK-based manufacturer called ExplorAudio, the simply conceived but extremely well-made clamp-on mic boom makes mic-ing up an upright bass, acoustic guitar, etc. easy. It is equally at home in the studio and on stage.

Made of durable and lightweight alloys and composites, it doesn’t load up your instrument too badly, and its instrument contact points are covered with silicone and other protective surfaces to prevent damage or scratching.

The boom can hold most mics; you can use an optional shock mount for isolation purposes. And since it’s a boom, you can adjust the mic’s positioning pretty freely. It allows for a large variety of placements, angles, and positions. And of course, where you place it on the instrument is pretty much up to you. So if you prefer the “off-axis towards the soundhole” option or the “pointed at the 12th fret” position, you can pull it off. 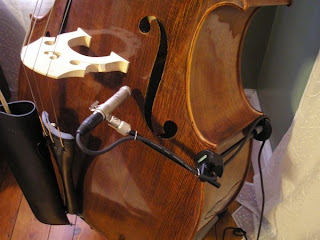 ExplorAudio makes several different models; a version for acoustic guitar, a version for Cello, a version for Upright Bass, and a version for “Extra Deep” Bass (for basses of unusual depth). They also make a “Guitar Plus” version which includes three separate depth shafts, allowing you to get one H-Clamp for multiple instruments. Very cool! The photo to the right shows my H-Clamp on my carved upright bass; it’s holding one of my Oktava MK-012 small-diaphragm mics.

The only place I know of to get these things in the USA is Gollihur Music – of course, I happen to work there. We always have them in stock, and the feedback from other musicians has been very positive. I have a couple of them in my home studio, and they’re definitely money well spent.